Did you know that people are far more likely to donate to your charity if you can make them smile? So, what better way than offering them a mental image of a dashing dinosaur, plodding panda or a sprinting Superman. The options for running in fancy dress are infinite and could help raise lot's of money for your charirty of choice.

In past years, pre race funding efforts have seen characters take to the streets, appealing to public support for their feat of endurance whilst donning rhinocerose or giant vegetables costumes! We have also noticed a somewhat disturbing increase in accounts of the bikini-clad Borat - Ouch, the Chaffing!

Final fundraising efforts can be supported by evidence of your fictitious alias in the moment of stardom. Surely there is no one who wouldn't donate to Thomas the Tank Engine steaming over the finish line â€“ Now that would just be rude. Fancy dressed runners are instantly admired by spectators. It is surprising how much support the likes of Ben the Big Banana will get from total strangers. Crowds will always give an extra cheer for those who make a special effort because they provide a much-needed antidote to the grimacing seriousness of the professional runners. Let's be honest, without a loping leprechaun (complete with a bottle of Guinness), or a sprinting smurf, running events would be far less fun to watch!

The camaraderie between these fancy dressed runners is an enjoyable experience for all, it isn't every day you can witness Winnie the Pooh sharing some H2O with Cinderella. New acquaintances at the pub will be astonished, or baffled, by your commitment. Whatever the response, it's a great start to a conversation, not to mention any potential love interests, who will always choose the likes of enormous running chickens over the regular "shorts & vest" type.

Many celebrity runners also opt to dress up whilst running. Sir Richard Branson did the Virgin name proud, dressed as a Butterfly. Whilst Princess Beatrice attached herself to 33 of her friends and entered the record books for the most linked runners. Last year around 150 runners attempted to break 75 Guinness world records during the London Marathon, these included the fastest vegetable, the tallest costume - One of the quirkier attempts included knitting a scarf while running! 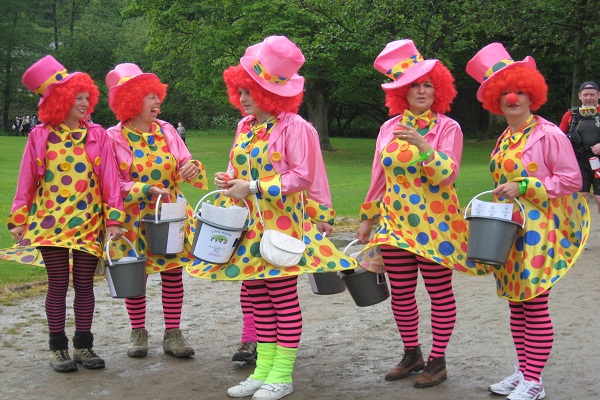 Back
Next: Smash Your Fundraising Target
Built by: Damage