My name is Alison and I’ve always been a keen runner. I have never really used my running for fundraising before. I always said that I hated bothering people by asking for money or sponsorship, but recently my attitude has changed. In the summer my nan became very ill. After spending some time in hospital she was admitted to the Inpatient Unit at Compton Hospice.

From day one the care she received was outstanding. The staff were always ready with a smile to greet my Nan and our family. They would always update us on how she was, whether good or bad. I now often refer to the people at the Hospice as angels, they were always looking over her. For a period of around 6 weeks the staff kept Nan comfortable. Being in such a beautiful environment with beautiful people meant my Nan, although she wasn’t always well enough to be aware of what was happening around her, was treated with the respect and dignity she deserved. Sadly she passed away on 20th September. It was then that I realised I needed to do something to help this outstanding charity – and that my running would set me on the right path.

Compton Hospice is a charity based in Wolverhampton which provides care and support to patients with life limiting illnesses and their families. They offer a range of services including a 24 hour Inpatient ward, Day Care Centre, Complementary Therapies, Spiritual Support and Social Work support. The hospice also provides care in the community from a team of nurse specialists who visit people in their homes.

Compton provides all of its services free of charge to patients, however this is at a cost of just under £6 million a year to the hospice. The hospice receives only a third of its funding from government so they have to raise just under £4 million a year themselves. I wanted to do my but to help them raise these vital funds.

Before my Nan became ill I hated asking people for money for fundraising. Now my perspective is different, I know how much Compton Hospice need the money and that they rely on people like me to help them raise it. I have asked friends and family to support me, set up a Justgiving page and regularly updated people on how my fundraising efforts were going on facebook.

I’ve always been a keen runner and have participated in marathons before so I knew what to expect in terms of training. I did struggle to fit in as much training as usual because my Nan was so poorly and I wanted to spend as much time with her as possible. In the end I completed the marathon in 4hrs and 30 minutes.

Don’t be afraid to ask people for donations. The more you raise the more it will spur you on with your running. 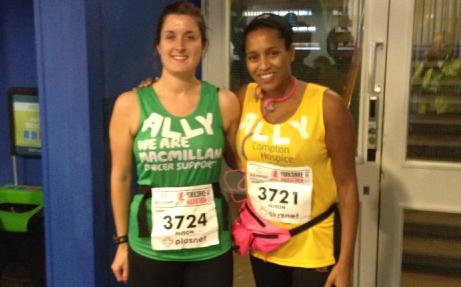 Back
Next: Phillipa's Story - Birmingham Children's Hospital
Built by: Damage